About the Honey Bee

The honeybee family consists of:

The queen bee is the largest bee and each hive has only one Queen. The queen is chosen as a larvae and fed the special royal jelly to enable her to become sexually mature when fully grown. Once in her life, the queen will leave the hive and mate with up to 15 drones per flight over several days before returning to the hive and beginning to lay eggs, which she will do continuously through her life (2 – 6 years).  A healthy queen bee may lay up to 2000 eggs per day. The queen bee has one main function in the hive: to lay eggs. She also produces a pheromone that helps to regulate the temperament of the colony. Due to her constant egg-laying, the worker bees clean and feed the queen for her entire life.

The drones are the only male bees in the hive and have no stinger. Their only job is to mate with the queen. To do this, drones have large eyes and slightly bigger bodies than the worker bee. This enables them to be able to see better and fly fast enough to try and mate with the queen. The drones require these attributes as the mating takes place in mid-flight. The drone dies once his task is complete. On average, there are only a few hundred drones in a hive that may contain many thousands of bees. More recent research indicates that the drones may also have a role in helping to regulate the temperature of the hive (34.7 degrees Celsius).

All worker bees in a hive are female. During their short life (4 – 6 weeks) they advance through various duties in the hive. Initially, worker bees look after the brood chamber and feed the drones and queen. They then work at receiving and storing the nectar; building honeycomb and cleaning the hive. Later they become honey ripeners and hive guards. Towards the end of their life, worker bees become foragers – collecting the nectar and pollen and bringing it back to the hive. The foraging bees we see on flowers in our gardens, have only about 1 week left to live. Worker bees also make the wax which is used to build honeycomb as well as propolis and royal jelly. 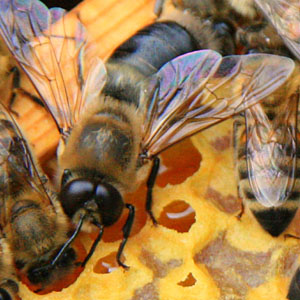